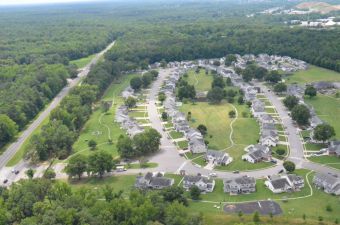 FORT LEE, Va. – Work is set to begin next month on a planned $50 million project to upgrade housing across the garrison, starting with the oldest – and smallest – homes on post.

Jackson Circle will be the first to see upgrades under a 10-year revitalization plan that would later include similar improvements in Harrison Villa, Madison Park and Monroe Manor, said Jason Frenz, executive vice president of development for Hunt Military Communities.

The project starts the second week of August, with 30 homes to be the first of 174 planned renovation projects in the neighborhood, he said. In all, more than 750 homes in four Fort Lee communities would be upgraded over the next six years.

“I am banking on 22 months from start to finish,” he said, explaining that each unit will take about three weeks to flip.

The Jackson Circle houses were built from 1996-2000 and were the first constructed on post since the early 1960s, Williams said. They are now the oldest homes on Fort Lee and are significantly smaller than newer units built by Hunt in recent years.

“We’ve got some great housing on post,” he acknowledged. “Now, let’s take care of Jackson Circle.”

The goal is to bring up the standard of living for Jackson Circle residents, Williams continued. “We think we can produce a home that is just as good as a new home outside the gate.”

The renovations will not make the homes any bigger, but the internal upgrades will make living in them better, Frenz said.

One improvement will be the elimination of a pantry, which will create a modern, open-concept design from the kitchen to the living room. Others include garage door openers; new kitchen appliances; new flooring, roofing and windows; and much more.

“A lot of work is going into the homes,” Frenz confirmed.

For Fort Lee, the renovation process is a few years ahead of schedule, according to Hunt. As the project moves to the newer neighborhoods, some are to be upgraded sooner than the normal 20-25 year timeline, Frenz said.

This is possible because, for the last 13 years, privatized housing managers have set aside money from rent payments to build up funds for renovations, according to Williams. Because of the program’s success, the construction can be completed without incurring any new debt.

“We see this as a great success for the program,” Williams said, “because we were able to do this without a handout from anybody.”

Maj. Gen. Rodney D. Fogg, Combined Arms Support Command and Fort Lee commanding general, told residents during the online town hall that the project was a “wonderful initiative.” Because of the success of the post’s housing program and the partnership with Hunt, renovations will be significant and make the homes much better for residents, he said.

Hunt and the DPW will, as much as possible, try to avoid displacing residents for the project by timing the construction with the summer moves, Williams explained. After a duplex is vacated, construction can begin on both sides.

However, some tenants will have to move as the construction gets underway. They will be given options to move elsewhere on Fort Lee or relocate off-post at no cost to them.

“We have a professional moving company that’s going to help us work through that,” Fogg said.

Off-post moves are limited to the tri-cities area, including Petersburg, Colonial Heights and Hopewell, but the Hunt staff is willing to work with residents as much as possible.

Similarly, the Housing Office will work with families to ensure minimum disruption, including keeping consistency of schools for families with children, Williams added.

Fogg said the options for relocating on post will depend on the inventory of homes available. He further noted that Soldiers should not be required to take leave as they go through this process, however, they will have to ensure they communicate and work with their chains of command.

Individuals who have to move have been notified, and the leadership’s goal is to keep residents informed throughout the process, Fogg emphasized. This includes a page on the garrison website with updates from the housing team.

Once work on the initial homes is complete, the next wave of residents to shift will be able to move into the newly upgraded spaces within their own neighborhood, Williams said.

“Though this may be difficult for some families, this is a big win for Fort Lee,” Martin observed.

As a Hunt employee, you will be helping our organization build value—and as your employer, we'll be committed to helping you build value, both personally and professionally. If you are talented, energetic, and customer-service oriented let's chat!